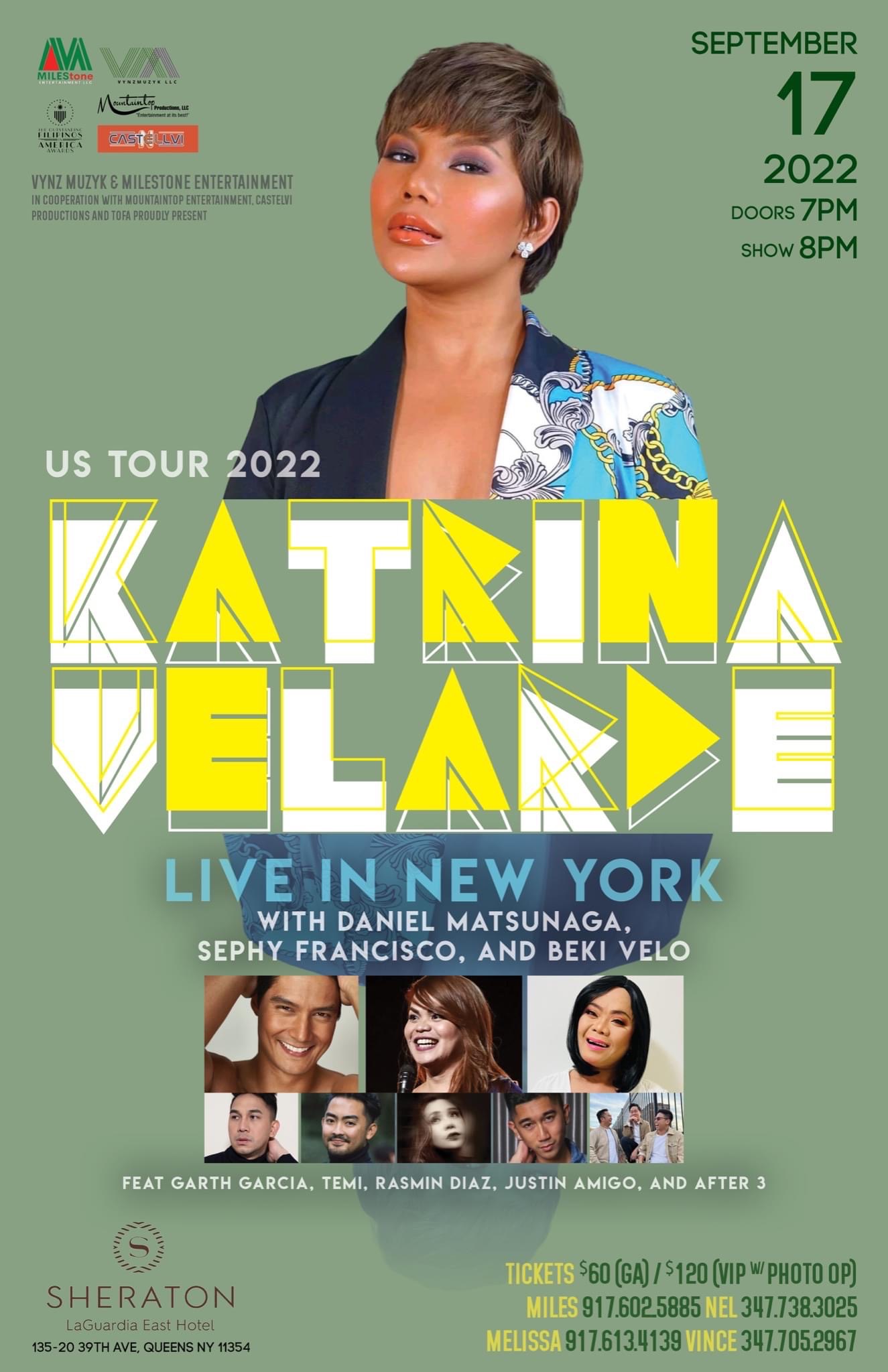 Katrina Velarde began her singing career as an “Amaturista”, joining contest after contest at the tender age of 7. Although financial difficulties forced her to support herself through school and find ways to help her younger siblings, she kept a positive outlook in life, thanks to music.  She later met Jennifer Maravilla and Alyssa Kate Quijano and formed “New Born Divas” to join a TV singing contest. In 2011, they made it to TV5’s “Talentadong Pinoy,” one of the most popular talent competitions during its time. “New Born Divas” was named the show’s 11th Hall of Famer. When New Born Divas disbanded, Katrina went on to audition as a solo singer in “The X Factor Philippines” in 2012, eventually becoming part of an all-female singing group known as “A.K.A. Jam” and was mentored by Gary Valenciano.  The following year, she remained with the group and went on to compete in It’s Showtime’s BIDA Kapamilya placing second. They went on as a four-piece and were guest performers in “Tuesdays with Gary,” eventually becoming his backup singers. Unbeknownst to the young singer, viral fame was just around the corner.

More popularly known as Suklay Diva, Katrina grew online fame because of her viral video singing a cover of Beyonce’s “Dangerously In Love” with the use of a simple plastic comb as a microphone. Katrina was likewise named Best Female Vocalist of the week on the website worldhiphop.com with the same song causing Chris Brown to retweet her video.  The video also caught the attention of Bibi McGill, lead guitarist and musical director of Beyoncé’s band, retweeting the video and commenting about her admiration for Katrina’s rendition of the song.

But there’s more to Katrina than singing. She joined TV5’s weekly drama series “Trenderas” and was even nominated for Outstanding Breakthrough Performance by an Actress at the 2015 Golden Screen Awards. She also guested in GMA News’ lifestyle show “MARS,” “Gandang Gabi Vice,” “The Mega and the Songwriter,” among others.  When it comes to dancing, Katrina’s appearances in “ASAP 29” and “It’s Showtime” have helped her hone her skills. She has been part of concerts of Gary V, allowing her to watch and learn from Mr. Pure Energy himself.

Singing remains Katrina’s core, however. Her talent has brought her to Hong Kong, California, and New Jersey. In 2013 she was featured on the track “Pananagutan,” the theme song of the dramas series “Honesto.” Katrina also shared her singing talent in Gary V’s albums “He Is Enough” and “Overjoyed” and “Got to be Real,” as well as the Christmas album of “The X Factor Philippines.”  She is also well known for covering the hits of international divas and local singing idols, as well as her impersonations which landed her a stint on GMA 7’s Superstar Duets in 2016.

She is currently being co-managed by Viva Artist Agency and has since released two singles, “Taksil” and “Lason Mong Halik” in 2017 while regularly doing corporate and live gigs. In 2018 Katrina took the ASAP stage by storm in ASAP Versus where she participated in a showcase of vocal prowess against the Ethereal Diva, Laarni Lozada.

Katrina was also chosen to interpret the PhilPop 2018 finalist, “Tama Na” which she also performed live during the grand finals. At present Katrina is gearing up for her first major concert entitled SiKat Ako which is scheduled for February of this year.